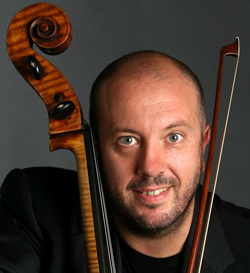 Born into the profession, when he was six he started playing the cello. He upgraded under Antonio Janigro and, in 1997, took First Prize at the “ROSTROPOVICH” Competition in Paris.

From then on he started a career as a soloist and performed with prestigious orchestras such as the BBC Philharmonic, the Rotterdam Philharmonic, the Orchestre National de France, the Orchestre du Capitole de Toulouse, the Philharmonic of the Scala, the Philharmonic Orchestra of St. Petersburg, the State Philharmonic Orchestra of Sao Paulo, the NHK Symphony Orchestra of Tokyo, the Tokyo Symphony, the Toronto Symphony and the Chicago Symphony, alongside leading conductors such as Riccardo Chailly, Aldo Ceccato, Gianandrea Noseda, Myung-Whun Chung, Daniele Gatti, YutakaSado, Paavo Jarvj, Valery Gergev, Yuri Temirkanov, Riccardo Muti and Mstislav Rostropovich himself, who wrote of him: “… he is a cellist of extraordinary talent, a complete artist and trained musician and possesses an exceptional sound that flows like a splendid Italian voice”.

Among those who have written music dedicated to him are Giulio Castagnoli (Concert for cello and double orchestra), Carlo Boccadoro (L’Astrolabio del mare, for cello and piano) and Asa Nisi Masa, for cello, 2 horns and strings), Carlo Galante (Luna in Acquario, for cello and 10 instruments) and Roberto Molinelli (Twin Legends, for cello and strings, Crystalligence, for cello solo and Iconogramma, for cello and orchestra).
Permanent conductor of the “I Soloists di Pavia” chamber Orchestra, an ensemble which he created, he is professor of cello at the Italian Swiss Conservatory of Lugano, at the Pavia Cello Academy and holds summer courses at the T. Varga Academy of Sion.
Enrico Dindo records for Decca and Chandos and plays a Pietro Giacomo Rogeri cello (former Piatti) dated 1717, entrusted to him by the Pro Canale Foundation.